As people gain new experiences with age, so do old experiences. But with these new achievements, there is always a harmony of age in the law of nature.

But some people consider this age to be just a number and look at life experience as important.

Now 99-year-old Giuseppe Paterno has become Italy’s oldest graduate, once again letting the world know that age is just a number to willpower.

Earlier, Paterno graduated from the University of Palermo in July 2020 at the age of 96 with a degree in history and philosophy. Since then he gave birth to a new movement. 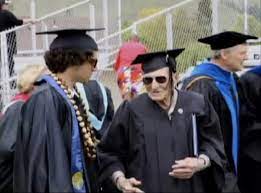 After that he obtained another two-year master’s degree in the same subject. He also introduced himself as the oldest student in Italy. This time also he passed with the highest marks.

Paterno was born in 1923 to a poor family in Sicily. Despite his love for books and studies, he could not go to university.

Because, he had to work in the Navy and Railways from the age of 20 to earn a living. The subsequent history is known to all. Paterno made history at the age of 99 without letting old age stop him.🔱