A fire broke out on a ferry carrying 185 passengers in the Philippines. The Philippine Coast Guard said on Sunday that all but two had been brought down safely.

One died and another was missing, the Coast Guard said. The ferry sailed through the islands of Mama Mary-Chloe Bohl and Leite.

💨A Coast Guard video posted on Facebook shows a boat carrying 156 passengers and eight crew surviving off the coast of Lehigh Hilongos heading for Bohol.

Some local media reported that some children jumped from the ferry as soon as the fire broke out. 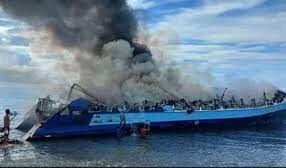 As seen in a YouTube video, the ferry is on fire and thick black smoke is spreading. During this time many people were seen floating in the water.

The Coast Guard said: “There were boats in the vicinity at the time of the incident, making it possible for crews and passengers to be rescued quickly.🔱