At least 31 people have died in severe floods and landslides in northern Afghanistan. Many people are still missing. 17 people were injured. News The Hindu.

According to media reports, a sudden flood occurred in Parwan province of the country on Monday (August 15). Many houses have collapsed.

The local authorities continued the operation to rescue them. Hundreds of thousands of residents have been displaced due to the collapse of houses due to landslides.

Flash floods have caused landslides in several districts in the Gharband Valley.

Many houses have collapsed. 31 people have died so far. About 100 people were injured. 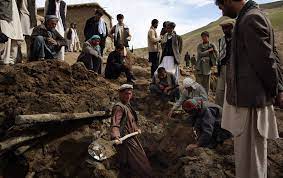 The local weather department has predicted heavy rainfall in the region for the next few days. The authorities have issued a warning fearing further deterioration of the situation. The Taliban government said that all assistance to deal with the flood and damage is continuing.