The word is from a banker. When he elaborated on the matter, even big economists got food for thought. Banker said, a cyclist is a disaster for the country’s economy. He doesn’t buy cars. As a result, he does not have to borrow to buy a car. A bicycle user does not carry insurance. He doesn’t buy fuel, he doesn’t even have to spend on car repairs.

The banker also said that one who is used to riding a bicycle does not have to pay for parking. No major accidents occur due to bicycles, hence hospitals do not receive patients.

People riding bicycles don’t even use multilane roads. Even the man doesn’t get fat because of cycling.

Bankers say healthy people are neither useful nor necessary for the economy. They don’t have to see a doctor. 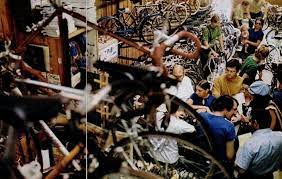 No need to go to the hospital. You don’t have to buy medicine. They do not contribute to the country’s GDP.

On the other hand, a new McDonald’s store means some jobs. Besides, the new shop provides income opportunities for at least 30 people. They are 10 heart doctors, 10 dentists and 10 dieticians and nutritionists.

So decide carefully, buy a bicycle or a McDonald’s shop? And those who walk on foot, they are the worst. Because they do not buy a bicycle!