‘The whole world is on one side, and I’m on the other/ Everyone says you’re wrong, and you’re right/ You were, you are/ I know you’ll be there/ Friends understand me, what else does it take to have friends?’ Remember the song sung by Shilpi Tapu? Friendship is just like that.

People have celebrated this friendship for ages. But how did the first Sunday of August friend day come? Interestingly, Bandhu Divas is not an immortal story of two friends.

It was introduced purely for business purposes. This was done in 1930 by Joyce Hall, one of the founders of Hallmark, the world famous gift and card retailer.

However, his efforts were not so successful. By the 1940s, people realized that this was not a noble cause, but a ploy to grow Hallmark’s card business. 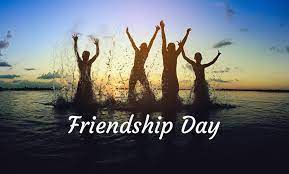 Since then, the celebration of Friends Day has somehow stopped.

Although Joyce Hall’s initiative did not catch on in the United States, the custom of celebrating Friends Day gradually spread to various countries in Europe and Asia.

However, Ramon Artemio Brech, a Paraguayan doctor, changed the way of celebrating this day. He proposed to observe World Friendship Day on July 20, 1958.

After that ‘Friendship Crusade’ was formed to spread friendship, unity and love across the world irrespective of caste and religion.

the first Sunday of August is celebrated as Friendship Day in various countries including Bangladesh.🔱