10 people were released as part of a prisoner swap between Ukraine and Russia. Among them are British and American citizens. They were taken in Saudi Arabia.

According to the New York Times, Saudi Arabian officials confirmed this information on Wednesday (September 21).

In a tweet from the Ministry of Foreign Affairs of Saudi Arabia, it has been mentioned that the prince of the country, Mohammed bin Salman, worked as an intermediary for the release of these 10 people who were held captive by Russia.

The release comes as Russian President Vladimir Putin has announced a military buildup in part for the war in Ukraine. This is the first time since World War II that Russia is going to hold such a military gathering. 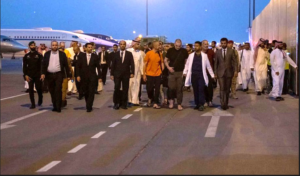 According to the New York Times, the two Americans who were released are Alex Druck and Andy Tai Ngoc Huynh. Both are former members of the US security forces. They went there to help the country’s troops in the war in Ukraine.

British Prime Minister Liz Truss expressed relief after the release of the prisoners. “This is great news for the prisoners and their families after months of uncertainty and suffering,” he said.