Octopus Paul. The 2010 Football World Cup was followed by a series of false predictions. Then in the 2018 World Cup held in Russia, Ut Shaheen surprised in the same way. Again, many people go to the side of the road to test their luck with Tia birds.

So many may believe that animals have the power of prophecy. ‘Oscar-the hospice cat’ emphasizes that belief a little more. This cat could sense people before they died. His hundreds of predictions about death shocked everyone.

This cat lived in the Steer House Nursing and Rehabilitation Center in Rhode Island, USA. Doctors often took the help of cats to heal sick patients. So was Oscar. They are called ‘therapy cats’.

Oscar came to this rehabilitation center in 2005. A total of six ‘therapy cats’ were brought in at that time. But after two years, it was understood that Oscar is not like 8 or 10 ordinary cats. 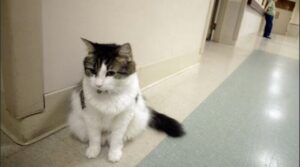 In a 2007 article in the ‘New England Journal of Medicine’, ‘geriatrician’ (those who treat the elderly) David Dosser wrote. This reveals a strange thing about Oscar.

The cat is believed to have smelled the patients’ ability to move and the biochemical substances released from their dead body cells. Hospital workers claim that Oscar has predicted the death of nearly 100 people by 2015.

Although many consider this fact of Oscar to be a mere coincidence. Some have claimed that the stories are fabricated. The hospital staff has raised the issue.

Oscar died on February 22 this year. He was 17 years old.