The governor warned residents of the area to flee for their lives, warning that the attack could escalate further.

Kiev on Tuesday demanded that Russia resist a number of anti-RPG missiles.

Exactly where in the east the Russian forces  confronted  not mentioned.

According to the BBC, Russian forces fired one missile at Donetsk after another.

The attack damaged several residential areas. The governor of the region also said that there were casualties.

At the same time, he asked the three and a half lakh people

there to leave quickly and safely to save their lives. 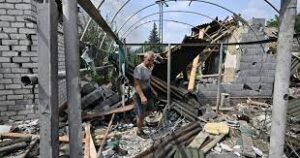 “The Russian army is not doing anything,” he said. They are attacking all over the country.

Innocent people are not getting rid of them. Our troops continue to try to deal with them.

However, this is not possible for us alone. The allies must also come forward. ‘

Russia launched a military operation in Ukraine on February 24 this year.

The first goal of the campaign was to capture the capital Kiev.

But a few weeks later, Moscow backed away from that plan.

They shifted their focus from Kiev to occupy the industrialized Donbass region.

The two main provinces of Luhansk and Donetsk are Donbass.

In 2014, pro-Russian independence activists declared an independent republic in the two regions,

They have been fighting against Ukraine in the region ever since.

regions as independent states. About five months later, Moscow sees the capture of a significant part of it as a major victory.

Russian defense officials say the entire Luhansk region has  liberated. On this day,

Ukraine  forced to withdraw its troops from Lisichansk, the last base in Luhansk.

On Monday (July 4th), Sergei Heidai, the governor of the Luhansk region, said that Russian forces had

taken control of the entire Donetsk region after capturing the last city in Luhansk.

However, Haidai is reluctant to call the fall of Luhansk a defeat.🔱